The Super Mega Ultra Giant Mad Decent Block Party Festival presented by Diplo will take place at Gilette Stadium in Foxboro, MA on July 21+22. The put it frank, this festival looks insane. Not only is there a stacked line-up (Billie Eilish, G-Eazy, Major Lazer, more) but there is a ton of activities around the festival. Checkout the line-up below: 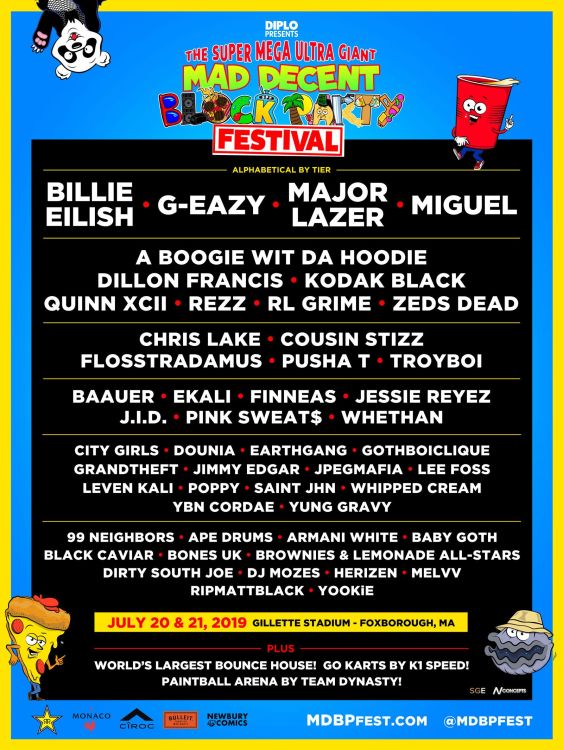 Billie Eilish has exploded onto the music scene after her new album was released earlier this year and has already headlined major festivals around the world before her 18th birthday. G-Eazy, Major Lazer, and Miguel round out the other headliners for the festival. The undercard is also loaded with popular names such as Dillon Francis, Kodak Black, RL Grime, Zeds Dead, Flosstradamus, Pusha T, Baauer, Whethan, and JPEGMAFIA. The daily line-up hasn’t been released yet but with the number of artists on the line-up, each day is guaranteed to be loaded with good music.

While the logistics of holding a festival around a football stadium may be troublesome, the layout sure seems exciting. Two stages are located outside the stadium with one on the football field. The festival boasts the world’s largest bounce house, K1 Speed go-karts, and a paintball arena.

Tickets are on-sale now starting at $189 for a weekend pass and $109 for a single day pass. Tickets can be purchased here – added bonus, parking is included with the ticket!