This past Friday, these three acts took the stage to a packed crowd at Union Transfer.
This was only the second night of their tour, and the subsequent freshness and excitement shone through. Rubblebucket is touring to promote their new album, Sun Machine. 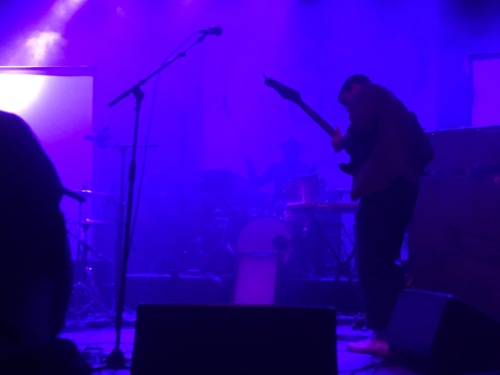 Star Rover was the most relaxed of the three, with a far more atmospheric approach than the others. The guitar-drum duo employed complex syncopations on both instruments to create a trance effect, effectively hypnotizing the crowd. Vocals very much took a backseat role, mainly mimicking the guitar melody as opposed to countering it. Having said that, the vocal harmonies were very tight throughout their set and certainly added an element of serenity to the set. Although they were mostly a relaxed outfit, they demonstrated that they could hit hard in glimpses throughout songs. Star Rover blended the complexity of progressive rock with psychedelic aggression reminiscent of Tame Impala’s “Innerspeaker”. The song that most encapsulates their sound is “Byron Bay”, which illustrates their immense ability to manipulate dynamics throughout a song and showcases their simply serene melodies. 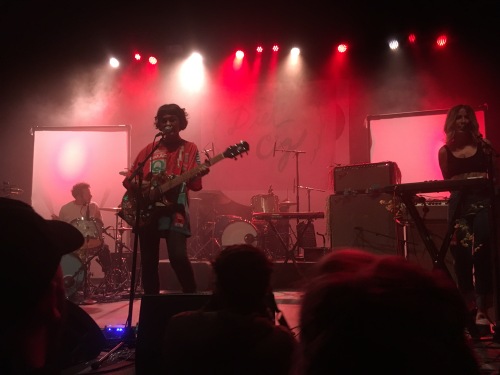 In the middle of the triple bill was Diet Cig. Diet Cig did a very good job of bridging the
very apparent gap between the three outfits. New York Times described their style as “peppy feminist pop-punk for all ages”. They are a minimalist outfit, having just guitar,  drums, and keyboards, just like Star Rover. However, they possessed the energy and slightly quirkiness of Rubble Bucket. What their songs lack in complexity they certainly make up in passion. They were really enjoying themselves on stage, with lead singer and guitarist Alex Luciano spinning around doing high kicks all throughout their performance. Because of this and their seemingly paradoxical but relatable blend of melancholy and joy (and of course, the music), they had a great set. Additionally, Luciano made sure to say that “Rock and Roll is for everybody” and made the crowd promise that they wouldn’t water themselves down for anyone, which really summarizes what Diet Cig is all about.

I noticed that there was bass in Diet Cig’s studio recordings, so I was perplexed as to why they didn’t have a bass player for live shows. Personally, I feel that  they occupied the sonic space that a bass player would normally take up with the full, aggressive guitar and the low frequency keys. However, it seemed a weird choice, a choice which Luciano later confirmed to me to be an intentional one. When speaking with me, Luciano said that they didn’t feel they needed one because they got on just fine with keyboards. They had bass players in the past but it didn’t work out. 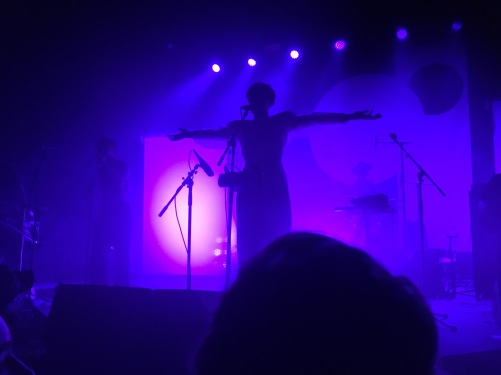 Headlining the show was Rubblebucket. Rubblebucket has the largest setup of the three, composed of two trumpet players/vocalists, a guitarist, bassist, drummer, and lead singer/saxophonist/keyboardist. While the horns are unusual, they offer a refreshing update to the almost cliche guitar and synth leads that are so abundant within indie and alternative music. Rubble Bucket has a somewhat odd, funky sound akin to the Talking Heads. Lead singer Kalmia Traver in particular had a very Byrne-like delivery in both her vocals and her mannerisms. I did double takes several times during the concert because I was convinced Tina Weymouth was on the bass. Their versatility was impressive, being able to churn out a poppy chorus just as well as they could conjure up a dance beat, often doing both in the same song. Their presentation was just as fantastic as the music itself, with calculated choreography and natural eccentricity. Notably, at certain times during the show, the singers hid behind white screens, allowing the crowd to see their shadows, which complemented the lights. The highlight of the show was when the band marched off the stage and into the crowd with drums or their trumpets and saxophones out into the entrance of the venue where they ended the show, amongst the crowd. This capped off what was an incredible and inclusive performance from all three acts.