On Saturday, November 12th, Fitz and the Tantrums and Barns Courtney brought the party to Philadelphia at The Fillmore.  Initially confused about the pairing of Courtney’s bluesy, country-rock ‘n’ roll sound with Fitz and the Tantrums’ indie-pop, neo-soul vibes, I soon realized that though varied in genre, both Fitz and Courtney share the ability to put on an incredibly energetic and lively show.

Barns Courtney warmed up the crowd by opening with songs such as “Glitter & Gold,” and my personal favorite, the incredibly catchy, gotta-stomp-your-feet, “Hands.” Courtney was very charismatic, and connected with the crowd between songs throughout the night, at one point noting his bleeding thumb due to going too hard on guitar. He later closed out the show with the moody yet dynamic hit single, “Fire” –by then having won over the entire audience as everyone moved and clapped along.

When Fitz and the Tantrums took the stage, they took the energy that Courtney created and then turned it up about another hundred notches. Throughout the night, lead singer Michael Fitzpatrick and co-vocalist Noelle Scaggs were constantly dancing and jumping back and forth around the stage. Their set was jam-packed, playing old favorites such as “Out of My League,” “Fool’s Gold,” “Moneygrabber,” and “6 am.”  Just as many newer tunes were performed, such as opening song, “Get Right Back” along with “Complicated,” which featured the sauciest sax solo I have ever seen, and the infectious indie-pop dance tracks, “Roll Up” and “Handclap.”

At the end of the night, Fitzpatrick took a moment to reflect on the recent election results, and passionately implored the “City of Brotherly Love” to live up to their name and do everything they can to spread love and acceptance. If the crowd’s cheering and dancing during the closing fan favorite, “The Walker,” served as any indication, Philly looks like they’re not going to disappoint in this mission of love. 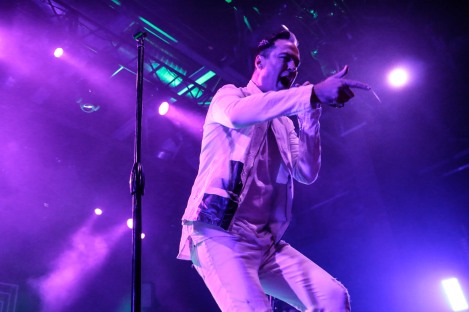